Vychází publikace Czechoslovakia and Eastern Europe in the Era of Normalisation, 1969–1989 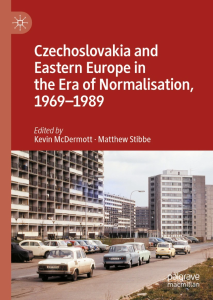 The political systems of Eastern bloc states were designed to mirror the Soviet institutional model. After the establishment of one-party dictatorships in Eastern Europe in the late 1940s, a strict Stalinisation process ensued by which the infant socialist regimes adopted many basic tenets of both Soviet party structure and party-state relations. Moscow’s new allies were permitted, however, to retain certain specific constitutional arrangements (unitary versus federal, individual versus collective head of state, unicameralism versus bicameralism); and they differed in political culture, character of party system, degree of industrialisation and scope of collectivisation, coercion and control. Furthermore, the Soviet model was not inert. On the contrary, its internal functioning varied over time. In particular, Nikita Khrushchev’s decentralisation experiments in the mid-1950s and early 1960s motivated reformers in the satellite states, notably Czechoslovakia. Yet, Khrushchev’s fall and the appointment of Leonid Brezhnev in October 1964 signified a gradual retreat from innovation. Reformist ideas in the Communist Party of Czechoslovakia (KSČ) in the mid-1960s were rooted in the initiatives of the late Khrushchev era, but the Prague Spring in 1968 collided with the burgeoning anti-reform milieu in the USSR under Brezhnev. In these circumstances, the liberalising measures of Alexander Dubček and his colleagues in Prague and Bratislava were effectively doomed.