A. Gagyi a O. Slačálkovi vyšla kniha The Political Economy of Eastern Europe 30 years into the ‘Transition’ 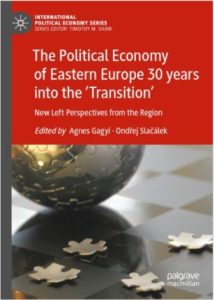 By the 30th anniversary of the fall of the Berlin Wall, in most parts of Eastern Europe, high expectations associated with postsocialist transition have been substituted by disillusionment. After 1990, Eastern Europe has been internationally treated with a low-interest acknowledgement of what was understood as a slow and erratic, but unquestionable process of integration in a Western-dominated world order. In the context of today’s geopolitical reorganization, East European examples of authoritarian politics once again become discussed as significant reference points for Western and global politics. This book represents a contribution to this debate from a distinctive East European perspective: that of new left scholars and activists from the region, whose lifetime largely corresponds to the transformations of the postsocialist period, and who came to develop an understanding of their environment in terms of its relations to global capitalist processes. A both theoretical and empirical contribution, the book provides essential insights on topics conventionally associated with East European transition from privatization to the politicized slogans of corruption or civil society, and analyzes their connection to the newest reconfigurations of postsocialist capitalist regimes. As a contribution to contemporary debates on the present global socio-political transformation, this collection does not only seek to debate analytical statements, but also to change the field where analytical stakes are set, by adding perspectives that think Eastern Europe’s global relations from within the regional context and its political stakes.

Ondřej Slačálek is a political scientist and journalist, he focuses on East European politics, nationalism and social movements. He works at Charles University, Prague. He is a regular collaborator of Czech new left journal A2/A2larm.